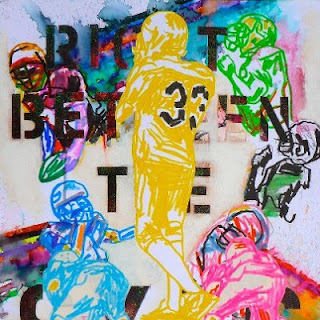 Artist Openings - November 16th.
JOCK, an ambitious inaugural exhibition of recent & new work by Adrian Carroll, opens on October 26th At Patty DeLuca Gallery. In this new body of work Carroll expands his dialogue with the history of the male figure in fine art. Concepts such as athleticism, body worship & gender construction, find their way into new ideas in contemporary painting.
Carroll explores the idea of the “masculine” while investigating a distinction between the biological sex of the male being and the “dominant” gender distinction of the “feminine”. Carroll uses fictitious high school footballers, physically aggressive adolescent boys & highly sexualized & seductive Drag Queens & Tranny Hustler’s to create a phantasmagoric armature where the clastic construction of the “Heterosexual man” clashes with the QUEER superego.
Carroll’s works are not traditional paintings, as his materials consist of quixotic plastic polymers, reductionist resins & carefully produced alchemical mediums; confounding academic tradition while coexisting within classic art historical paint stuff. This new exhibition includes an interactive sculptural installation, where Carroll invites the public to become more than simply a “viewer” but rather an integral component in the binary of the installations political power suggesting the liberation of equal rights.
Carroll also introduces another uniquely contemporary experience in her new pictures: digital culture’s effect on painting and seeing. The somnambulist characters that inhabit Carroll’s work imitate a simulacrum between the artificiality of the cameras eye and the impurity between personal experience and the phenomenon of memories distortion.
Some of these pieces are infused with other more explicit references to the history of painting. In this body of work, one will sense a feeling of chiaroscuro inspired by the great masters of the Italian Baroque and High Renaissance, such as Titan and Caravaggio. A connection with the warm opacity, translucently & flourishing of vibrant color inspired by the styles of the French Impressionist painters, Claude Monet & Edgar Degas will surly be noticed. Wrenching the bolts together of these periods of influence with the pure debauchery and calculated “cool remove” of postmodernism, Carroll finds inspiration in artists such as Mike Kelly and Bjarne Melgaard. These conflicting master visions are cannibalized, regurgitated & amalgamated a new through a multi –layered pentimento of Carroll’s own creation. This conception provides the latticework toward a newly explored visual language.
Adrian Carroll graduated from The School Of The Museum Of Fine Arts, Boston, in cooperation with Tufts University & holds a Masters in Fine Art. Her work was presented in an exhibition entitled “ Traveling Scholars” at the Museum Of Fine Arts, Boston in 2003 & has shown in numerous exhibitions in New York City. Carroll lived and worked in Brooklyn New York for many years but now resides in Provincetown and continuously works in Massachusetts.
Posted by provincetown art guide at 10:38 AM No comments: